We assume that the student knows everything that will be detailed in this chapter. The purpose is not to teach, but a quick review.

Combinatorial circuits have no memory. Therefore for a given input, they always give the same output. This means that they can be represented by a truth table. 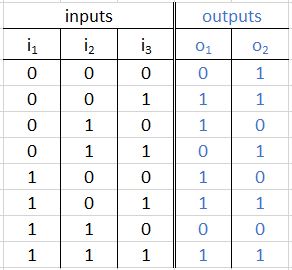 In combinatorial circuits “every combination of inputs corresponds a row of a truth table. Hence, this circuits are known as “Combinatorial Circuits” 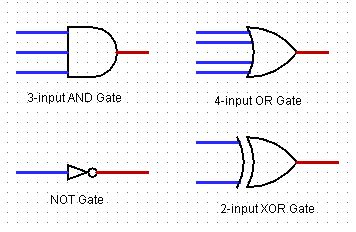 For convenience, NOT Gates are usually compress into small circles. An example is shown below

Given its truth table, any combinatorial circuit can be constructed as a two level AND\OR circuit by using a technique known as “Karnaugh Maps.” or complicated circuitry can be constructed by using Queen-McCluskey method. You should know at least Karnaugh maps from your digital design lectures..

Surprisingly, microprocessor design is not a very complicated topic. We will not design circuits complicated enough to require Karnaugh maps. In the department of combinatorial circuitry, all we’ll need are MSI circuits and simple gates.

MSI Circuits are the next level of combinatorial circuits, as they can be constructed by using AND, OR and NOT gates. The MSI chips we will use are decoders, encoders, multiplexers, demultiplexers. 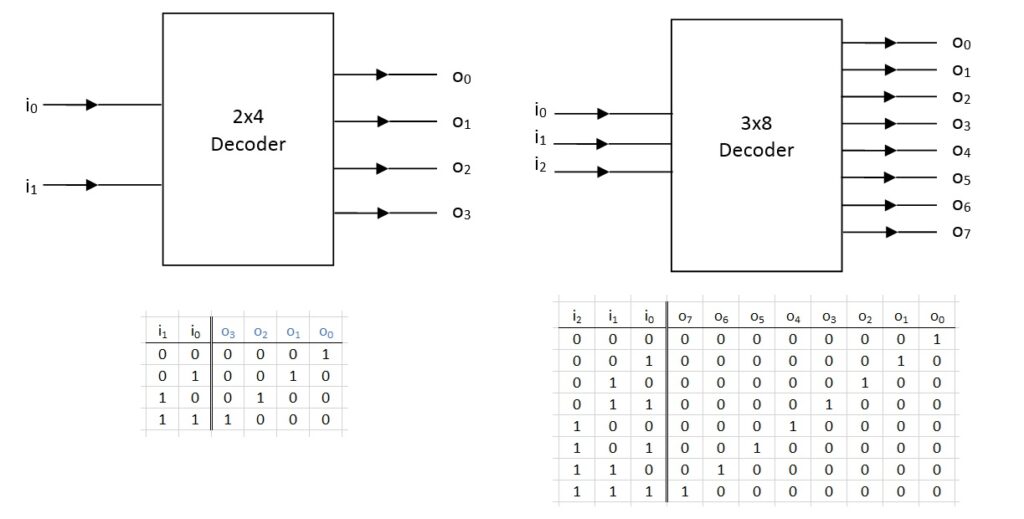 Encoders are usually considered as just the reverse of decoders. But in actuality, they are much more complicated, as unlike decoders they have many ambiguous cases to solve. The case below is very simple.

But consider the case where there are multiple 1’s entering to the encoder.

Or what will be the output if all inputs are zero? 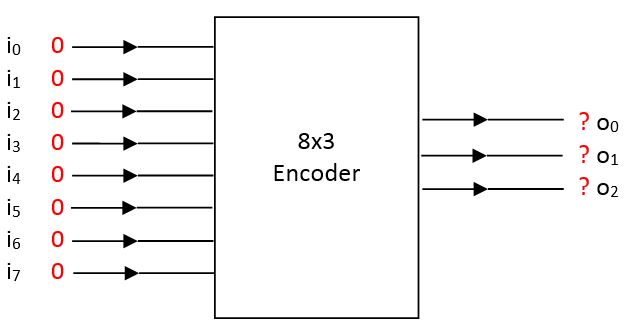 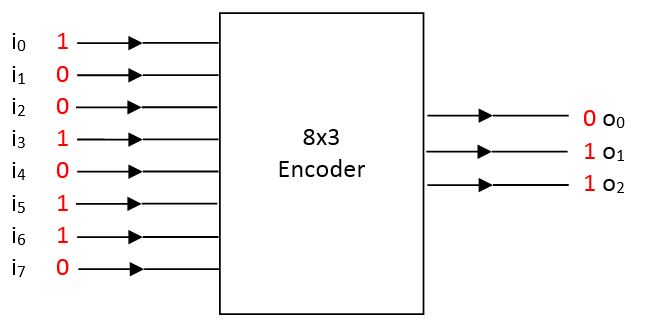 The problem of all-0 input is resolved by adding an “active” (A) output to the priority encoder. When all inputs are 0, the encoder is considered to be inactive and the active output becomes 0. In this case, the output of the encoder are undefined (or, “don’t care”, indicated by a letter d with a slash in the truth tables and diagrams). If any of the inputs is 1, the encoder is considered active and the “active” output becomes 1.

Below, a priority encoder with an active line is drawn and some examples of its operation is given. Active output is indicated with the capital letter “A”.

Here is the truth table for a 8X3 priority encoder with an active line. As usual, the active line is indicated by capital “A”. 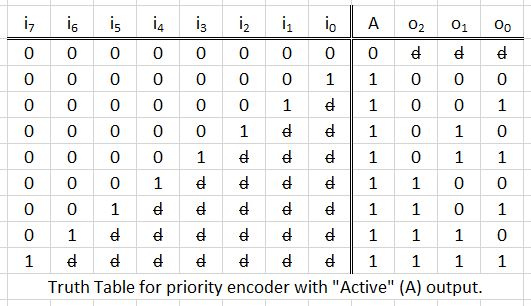 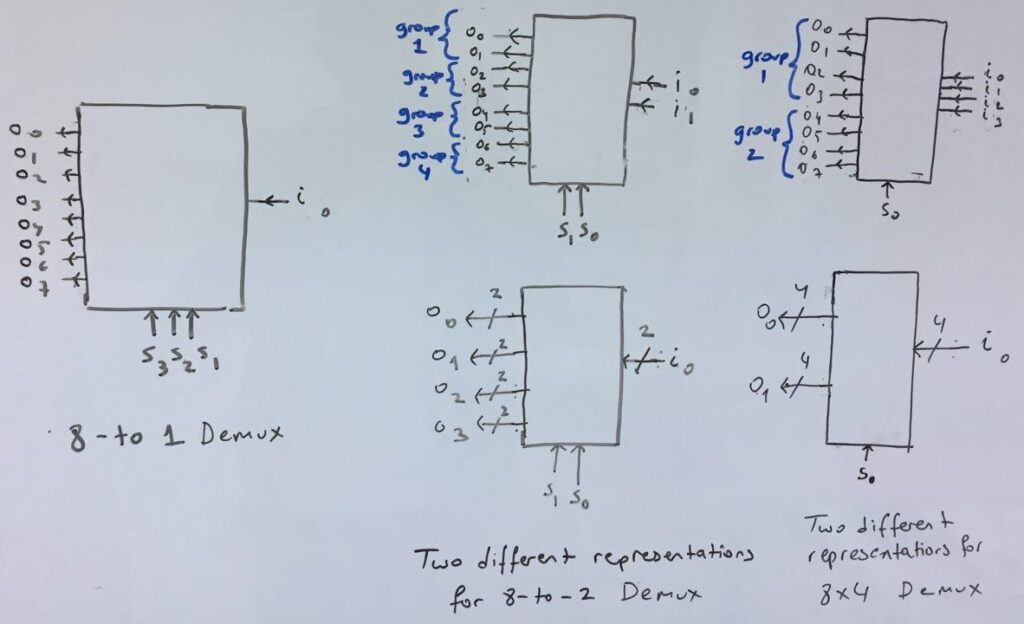 In this section, we will develop hardware circuits for various arithmetical and logical operations: Adding, Subtracting, Incrementing, Decrementing, bitwise and, bitwise or, bitwise xor, bitwise not.

The truth table for adding two 1-bit binary numbers is

Or, shown in a diagrammatical way, 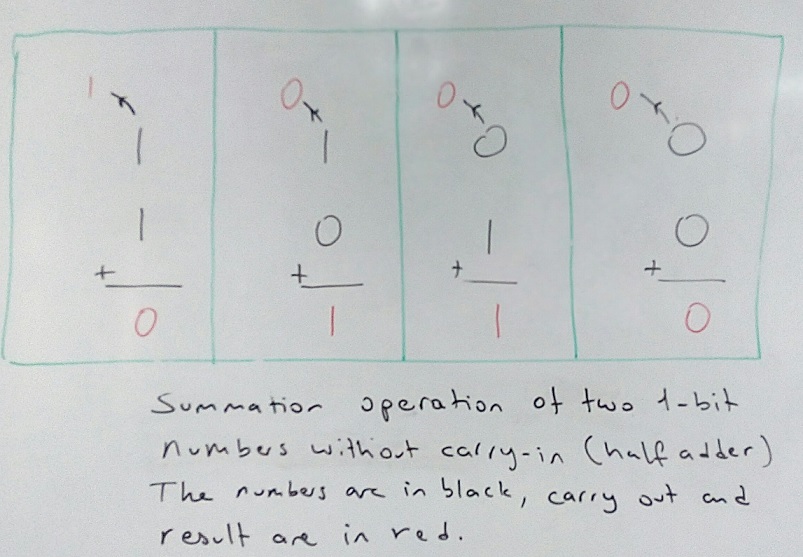 Hence we can realize this adder as a two-gate circuit..

The circuit above is known as “half adder”. As mentioned above, it adds two 1-bit numbers. It has two inputs and two outputs.. 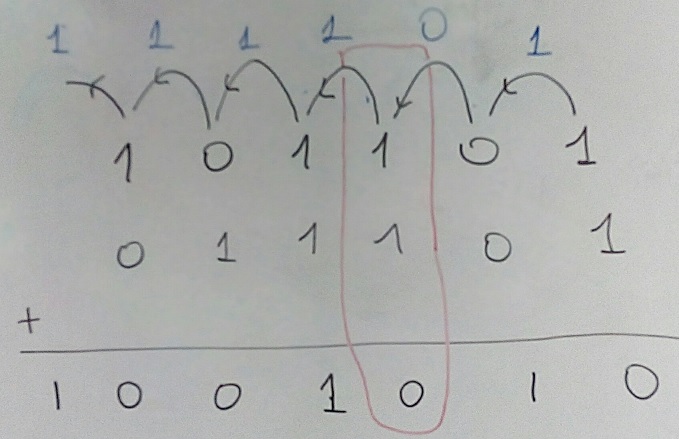 In the table below, all the possible combinations that can occur in a column is shown.. 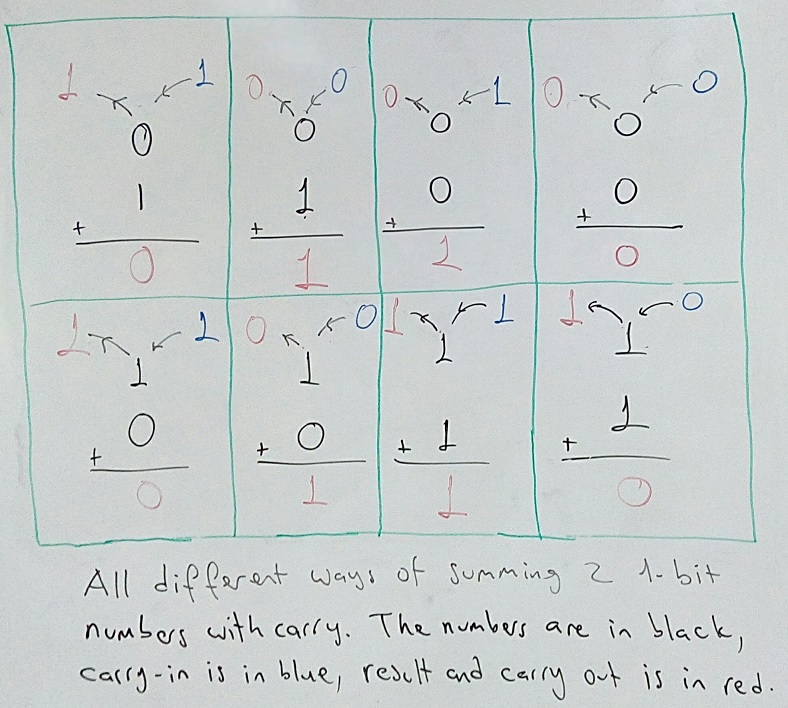 Therefore, what we need is some digital circuit which can add three 1-bit numbers. We can construct such a circuit with two half-adders and a single or-gate. 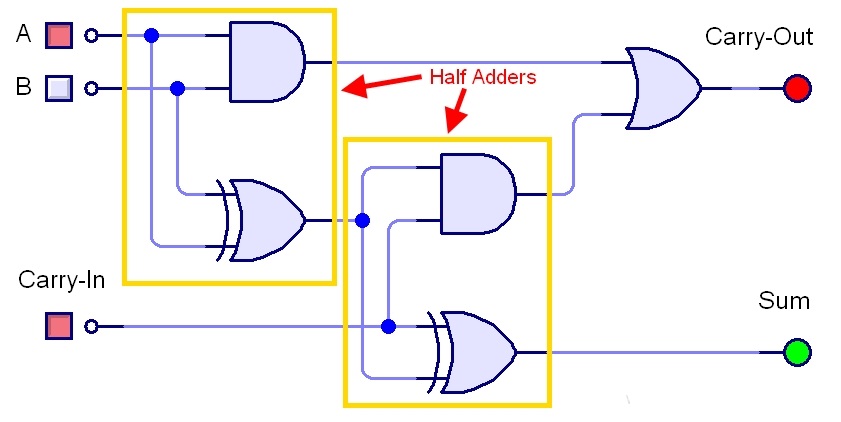 In two’s complement arithmetic, it is very easy to obtain a subtractor from an adder:

Sequential Circuits are circuits with memory. Therefore they cannot be represented by a truth table. A Sequential Circuits are usually defined as a finite state machine (FSM). The transition between the states is controlled by a clock. At every clock edge, FSM checks its inputs, and, depending on its inputs and on the state its currently in, transitions to a new state.

The state transition diagram of an example FSM is given below: 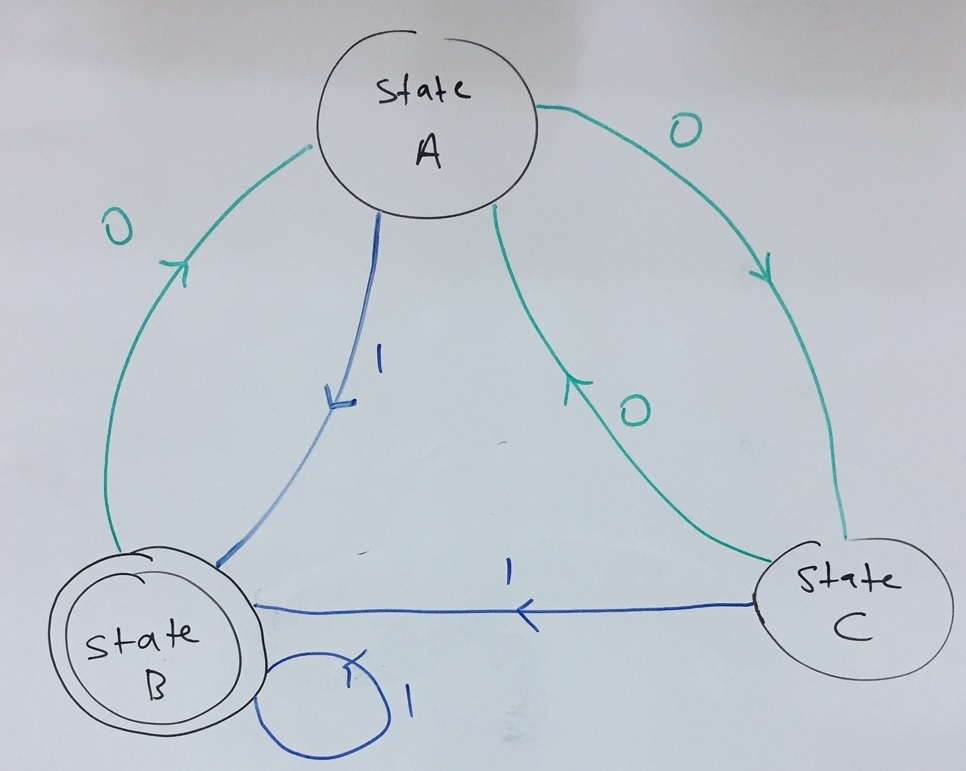 FSM always starts at the start state, which is indicated by a double circle. In our diagram the start state is the state B. The state transition table for the same FSM is 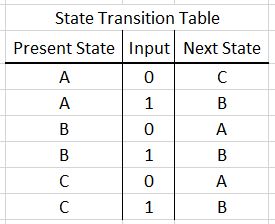 Example: Let us consider, the input

We assume that our FSM works with a 4HZ clock, ie changes state at every 0.25 seconds.

Before realizing our circuit, we have to assign a unique binary number to each state. If we have n states, this number must be log2(n) [Round] bits long. State Assignment can be done arbitrarily, but some state assignments can be realized with lesser number of gates than the others, hence are more economical. To find the most economical state assignment is known as “State Assignment Problem”. Unfortunately, this problem is NP-complete.

For the above FSM, some of the possible state assignments are given below.

As our FSM consist of 3 states, we assign two-bit numbers to each state. We will use Assignment 1 (Ie: Blue Assigment) for the rest of this example. After the state assignment, the FSM diagram becomes 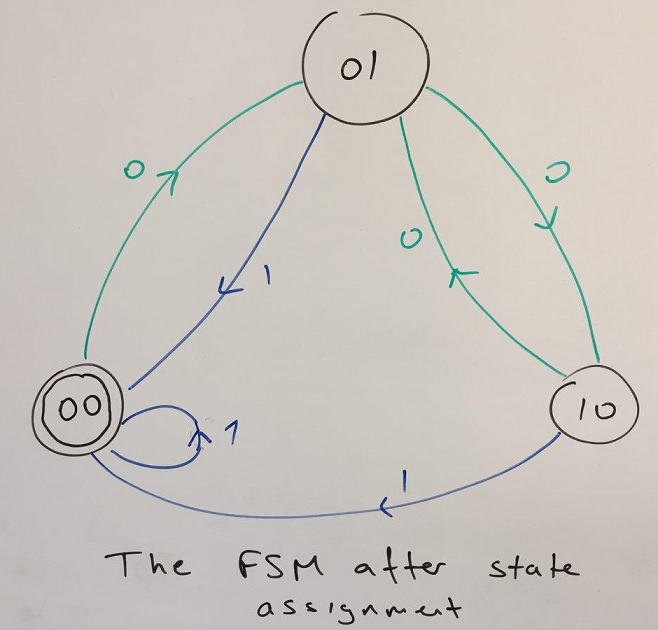 and the state transition table becomes 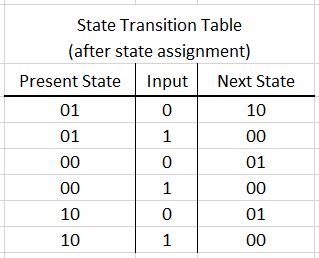 And the above example becomes 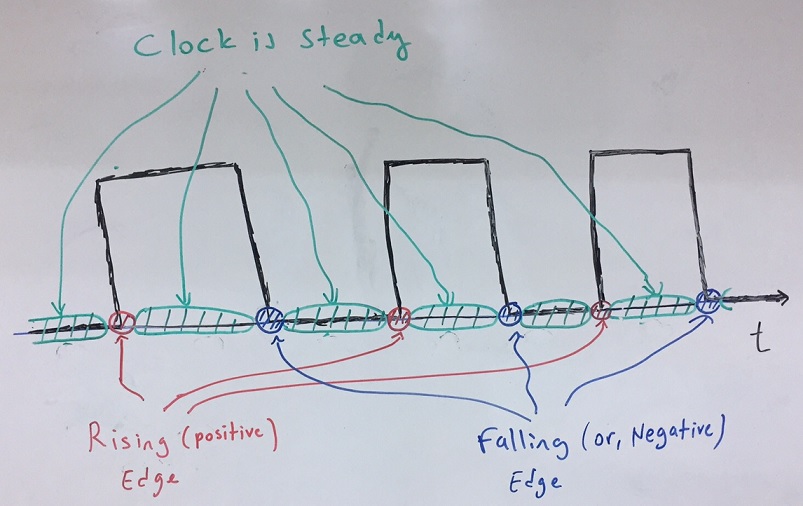 Sequential circuits are realized by using flip-flops (FF’s) together with AND\/OR\/NOT gates. There are many different kinds of FF’s. Some examples are: SR-FF’s, D-FF’s, T-FF’s, JK-FF’s etc. In these lecture notes, we will only use SR_FF’s. We will review the theory of SR-FF’s below:

SR-FF is a 1-bit memory. Its state is indicated by its output, Q (Most flip flops also provide the negation of the state, Q-bar). It has two inputs: Set (S) and Reset (R). Its state transition table and FSM are given below: 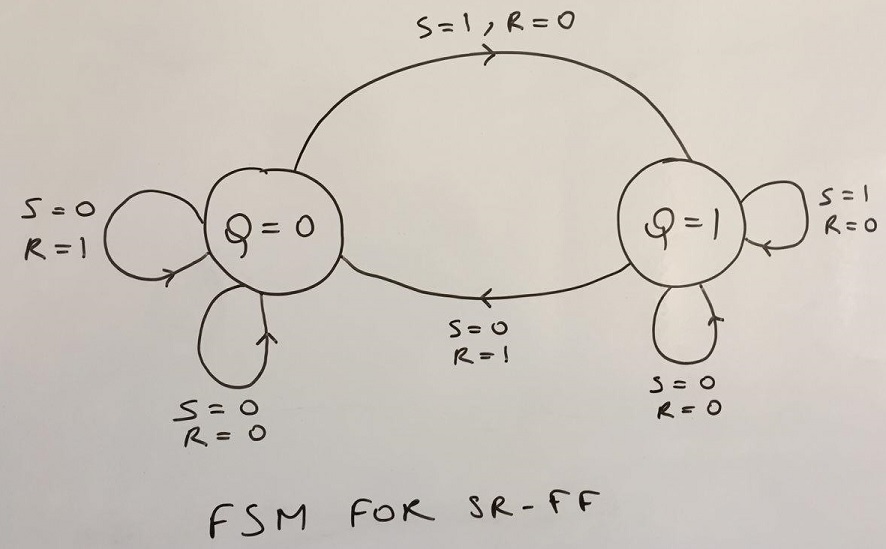 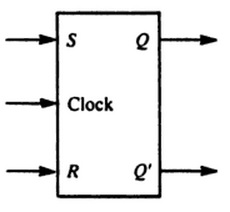 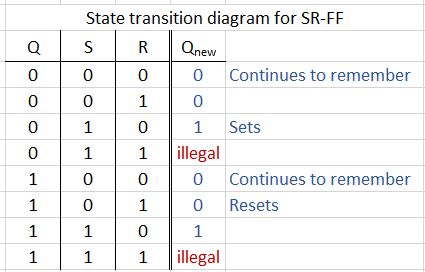 SR FF has two states: 0 and 1. It changes its state only at the positive clock edges and keeps its state at other times.

Note that the above table can be compressed into

A sample run of the SR-FF is given below:

1.4 Definition of an FSM state by an SR FF

We will use the FSM given above to illustrate the procedure. First, we will slightly modify its state transition table as 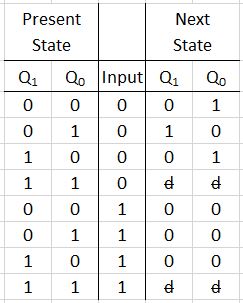 Note that we have assigned every bit of the state to a flip-flop (ie, Q1 and Q0). Hence we have two FF’s representing the states. Also, as we do not have a state 11, we mark its next state as don’t care (d with a bar). 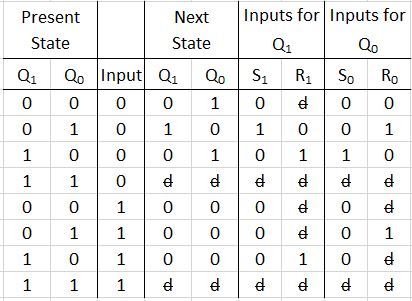 We have to generate these FF inputs from the present state and the input. This can be achieved by Karnaugh maps: 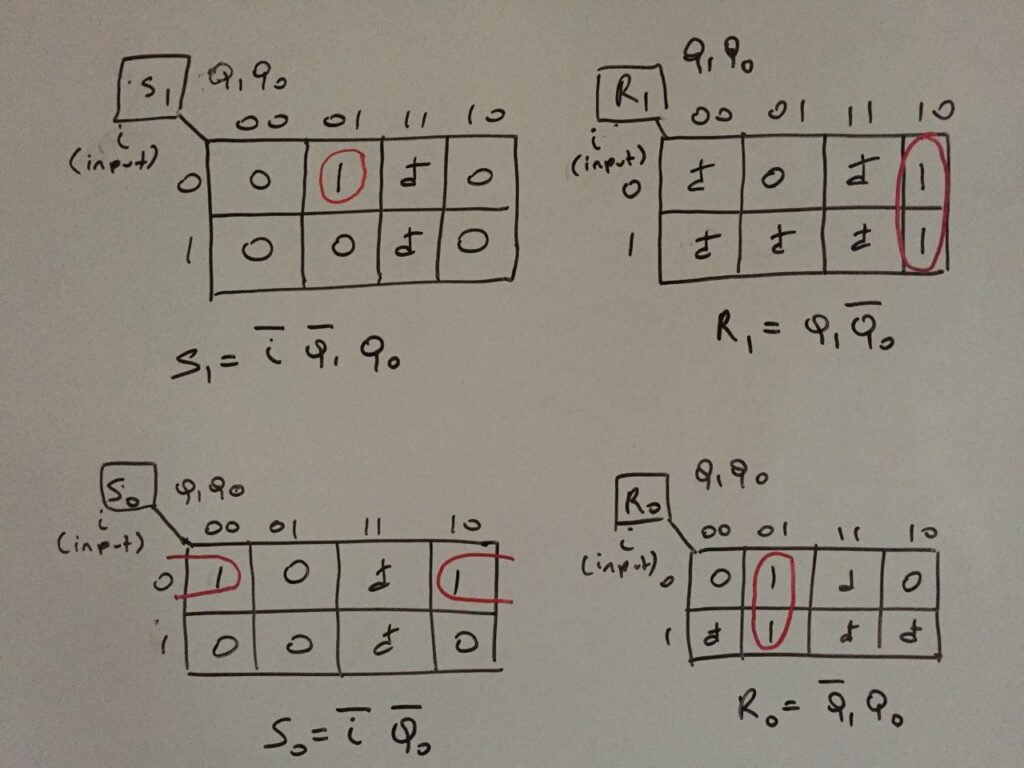 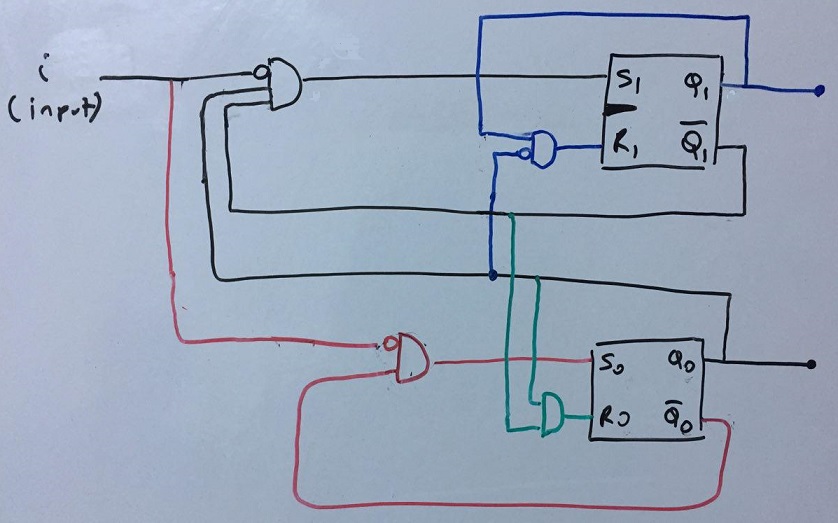